The Nazareth Trust is delighted to announce that another new patron is joining our team!

Bishop John Davies is the second patron joining the Trust this year.

Recently retired, John Davies served as Bishop of Swansea & Brecon from 2008 and as Archbishop of Wales from 2017 until May this year. 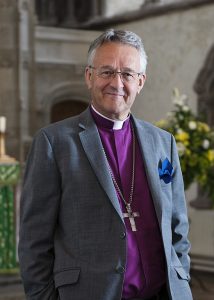 John was formerly a solicitor before being ordained in the Church of Wales in 1984. On becoming Bishop in 2008, he assumed responsibility for the ‘Church and Society’ brief on behalf of the Bench of Bishops of the Church in Wales. As both Bishop and Archbishop of Wales, John showed great interest in matters of social justice, speaking out on a range of issues, including homelessness and housing, rural problems, assisted dying, organ donation and poverty. He has been chair of Housing Justice Cymru since its launch in 2016 and has served as a trustee of Christian Aid, chairing its Wales National Committee for almost nine years from 2010.

At the same time, John focused on the needs for the Church in Wales to refresh its vision, image and purpose, to embrace change and, through doing so, to aim for growth. He has urged members to be more ambitious and courageous in evangelism. He oversaw the launch of a major £10 million Evangelism Fund for projects to achieve better engagement with and fuller understanding of Christian life and the Christian Gospel. In 2017, John was appointed as a Knight of the Order of St John of Jerusalem; a title that was also held by Albert, Prince of Wales, back in the 19th century!

The Trust welcomes John to the organisation. We look forward to working with him on upcoming projects this year.