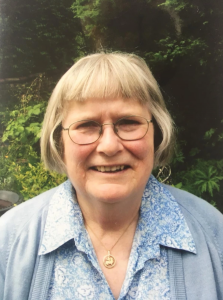 We’re saddened to share the news of Patricia Baxter passing away. Patricia was passionate about the history of the medical mission and dedicated her life to supporting researchers from all around the world.

We owe so much to Patricia. ‘Vartan of Nazareth’ (2012), the book that narrates the fascinating story of our founder, Dr Pakradooni Kaloost Vartan, wouldn’t have been possible without her. Malcolm Billings, the author, acknowledged Patricia’s help at the beginning of his book: “Many people have helped guide my travels through the nineteenth century in search of the little-known Vartan of Nazareth. Patricia Baxter, Honorary Historian of the Edinburgh Medical Missionary Society, generously shared many years of her research into Vartan’s life”.

Missionary work was deep-rooted in Patricia’s family. It all began with her grandfather, Alexander Baxter, who received funding to study medicine through EMMS. While he was training at the EMMS Cowgate Dispensary in Edinburgh, he met his wife, Emily. After Alexander’s graduation, they travelled to China and worked there together until he passed away in 1918.

Alexander’s son David (Patricia’s father) was eager to follow in his father’s footsteps and become a missionary doctor. After training at EMMS and Edinburgh University, he and his wife Margaret served as missionaries of the Church of Scotland in India. Patricia was born in the Christina Rainy Hospital in Royapurum, Madras, in 1942. After spending her early childhood in India, her family moved back to Scotland in 1953.

Patricia trained as a nurse and married Andrew Baxter, an Ear, Nose and Throat specialist in Dollar (Scotland), in 1966. They both worked on the EMMS archives, collecting and cataloguing treasured historical material. After Andrew’s tragic death in 1996, Patricia continued to share stories of former EMMS students in her “From the Archive” column in the Healing hand and kept in touch with other researchers.

Patricia kept in touch with both charities that emerged from EMMS: EMMS Nazareth (The Nazareth Trust) and EMMS International. Patricia would regularly phone the Nazareth Trust’s UK office in Edinburgh, keen to get an update on our current projects. She was a real encouragement for all of us and always kept us in her prayers. Patricia was friendly with Dr Peter Green, a former doctor at the Nazareth Hospital, and many others connected to the Trust.

We thank God for the time He gave Patricia and for Patricia’s invaluable contribution to the Nazareth Trust. Please keep her son James and his wife Alison in your prayers, as well as Patricia’s grandchildren, Louise and Andrew, as they mourn their loss.